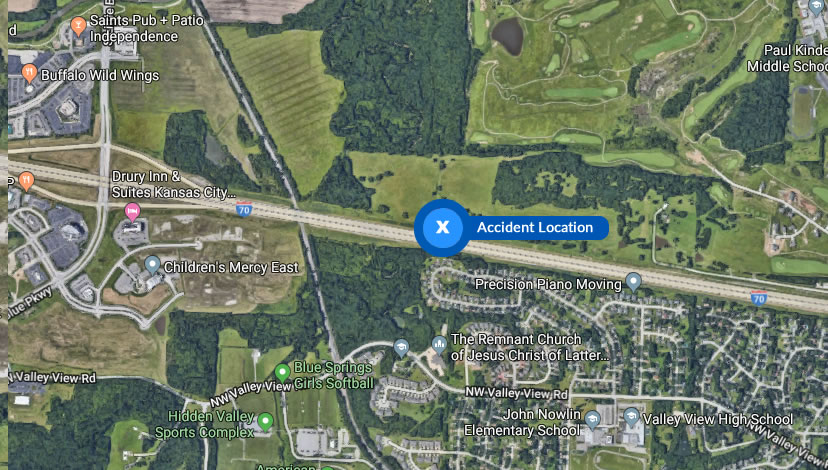 A crash occurred on September 21, 2019 around 11:30pm on east bound I-70 near the 17.6 mile marker in Blue Springs, Missouri resulting in serious injuries to a 21 year old male and moderate injuries to a 21 year old female. The collision involved Graham Mitchell, a 22 year old male and Tony Tanumai, a 25 year old male, both of Independence, Missouri. Both vehicles were headed east on the 70 when the accident happened. According to the crash report, the collision occurred when the Pontiac Grand Prix driven by Mitchell rear-ended the Chevy Traverse driven by Tanumai.  After being hit, the car driven by Tanumai traveled off the left side of the road and struck the concrete barrier, then came to a stop. Mitchell’s vehicle had extensive damage and the vehicle driven by Tanumai was totaled. Both vehicles needed to be towed away from the scene.

Three people were injured in the crash, including Tony Tanumai who suffered minor injuries. Taimaine Tanumai, a passenger in the vehicle driven by Tony, was seriously injured and was transported to Centerpoint Hospital by ambulance. Kerri Coen, a 21 year old female from Blue Springs who was a passenger in Mitchell’s vehicle, was also injured in the crash. She was also taken by ambulance to Centerpoint with moderate injuries. All three injured were wearing seatbelts according to the report.

Accident Location:
Eastbound on the I-70 near the 17.6 mile marker in Blue Springs, Missouri (Jackson County)